In 2020 Giacomo Smith, Kansas Smitty's founder was commissioned by the celebrated Berlin label !K7 to write new material for a new series of releases built around the Plunderphonia concept.  The concept is to steal, plunder or reimagine near century old material and to do something unexpected with it. Giacomo dug deep and searched the catalogues of the artists that inspire is work with Kansas Smitty's, Jelly Roll, Bix Beiderbeck even Maurice Ravel. This focus on great American composers from the early days of ragtime, jazz and swing was met by the inspiration to sample these works, with a specially curated line up of musicians and see them through the rubric of his London experiences.

Kansas Smitty's distinct voice stands apart from the swell of UK centric sounds that has erupted from London over the last half a decade. It is not surprising given that Giacomo, the band leader and main writer is an Italian-American. Born in the former and raised in the latter he made London his home in 2011.  The music that drove him to master his craft and continues to fascinate him to this day are at the roots of American music. Delta blues, folk and early New Orleans music. Musicians like Jelly Roll Morton, the Folkways record label, Alan Lomax and Big Bill Broonzy, Duke Ellington and Jimmy Guifre. No small wonder then his band Kansas Smitty's continue to define their own lane against the backdrop of London's flourishing scene.

In the decade that Giacomo has been based in the UK he has immersed himself in the city and made it his home. Collaborating with many of the luminaries of "The London Jazz Thing|" Femi Koleoso, Theon Cross, Moses Boyd et al. When asked directly if he could have produced the Plunderphonia record if he hadn't lived in London the answer was an emphatic "No way!" this music is a direct response to this americans experience of making music and exploring culture in London.

The band features a bespoke line up that connects all corners of the contemporary jazz landscape. Joe Webb, keys and Ferg Ireland on Bass and who also supported in production as MD for the project are long time collaborators with Giacomo on many Kansas Smittys' projects. Dylan Jones of Ezra Collective, Pyjaen on trumpet and rising star Jaz Kayser on drums are both products of the Giacomo's lockdown project "KSTV" which against the backdrop of Covid forged new connections with both Dylan and Jas and enabled this brand new quintet to come together organically as the project developed.  Another outcome of KSTV was making the connection with composer and band leader of some renown Laura Jurd who will be playing as part of the touring band for Plunderphonia. 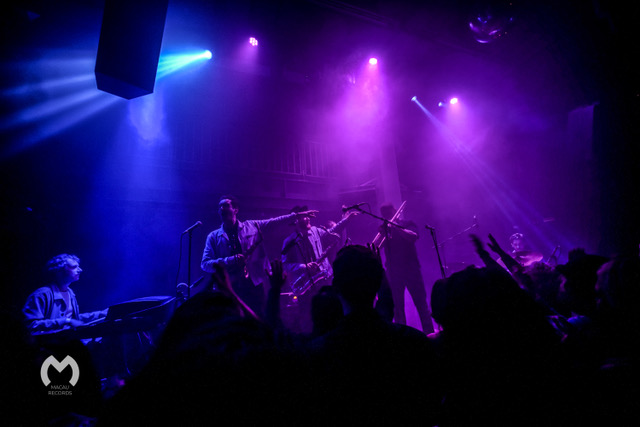 Kansas Smitty’s have garnered fans from across the music community and beyond for their ambitious, original and cinematic music. Their third studio album “Things Happened Here” (!K7/Ever Records) with breakout single Riders generating over 3 million streams and attention both domestically and internationally. Garnering support from Jamie Cullum on BBC Radio 2 who names them “One of the great jazz bands of our current age” alongside BBC6 Music’s  Cerys Matthews revelling in their performances “Totally unpredictable, they march to the beat of their own drum”.

Described by The Guardian as “A band that doesn’t sound remotely like any of its contemporaries” and “irresistibly groovy” the Kansas Smitty’s sound encompasses both the London jazz scenes movement towards the dance floor and a meditative and nuanced sound all of their own meaning that they are as at home in the club as they are the concert hall.

Aside from their inimitable music they are known for being ‘the band that owns a bar’ in east London’s Broadway Market. Sadly the onset of the Covid era forced them to leave that place and to relocate. This launched a new chapter in Smitty's journey.  To keep doing what they love they created KSTV. This new online space for live jazz where a handpicked selection of London’s best young players such as Soweto Kinch, Jas Kayser, Femi Koleoso, Kit Downes, Camilla George and actor Damian Lewis.

As well jazz and mainstream festival dates in the UK and abroad including North Sea Jazz(NE), Love Supreme and Rochester Jazz Festival in the US. Smitty’s have held down residencies at Cheltenham Jazz Festival, Wilderness Festival and performed sold out concerts at Shoreditch Town Hall.